Taarak Mehta Ka Ooltah Chashmah is one of the longest-running sitcoms across the globe with thousands of episodes. The show is a fan favorite for the last 12 years. While some actors stick to the show from the beginning, some actors were replaced due to many reasons.

The show ‘Taarak Mehta Ka Ooltah Chashmah’ has been in the limelight every now and then because of its huge fan following and the stars often made interactions on social media. A similar thing happened recently when actress Nidhi Bhanushali shared her Bikini video.

The actress rose to fame after playing the iconic character Sonu Bhide in the Sub TV’s sitcom show ‘Taarak Mehta Ka Ooltah Chashmah’. The actress is getting lots of attention for her heavy transformation. The actress shed kilos of weight and working on her glam avatar.

Recently, the actress shared a video on her Instagram which is a big proof of her jaw-dropping transformation. The video is getting viral on social media in which she is boldly flaunting her bikini look with the nose ring. It is surely her never-seen-before avatar in which she looks like a gorgeous diva with all potential to be the next social media influencer in fitness and beauty.

Nidhi Bhanushali has taken a break from her work and gone for a vacation on a tropical island where she flaunted her midriff abs in a sensational bikini. One of her fans made a comment that drew everyone’s attention to the comment section. The hilarious comment ‘Tu To Bahot Badal Gayi Re Sonu’ received more than 300 likes.

Nidhi spent her new year underwater in the sea. One of her videos on Instagram has crossed 1 Lakh views and went viral. Take a look at some of the recent pictures shared by Nidhi.

Nidhi quit the show ‘Taarak Mehta Ka Ooltah Chashmah’ to pursue higher studies. Showrunners found a good replacement for her in Palak Sidhwani. Sonu is the only girl member in Tappu Sena of the Gokuldham Society. 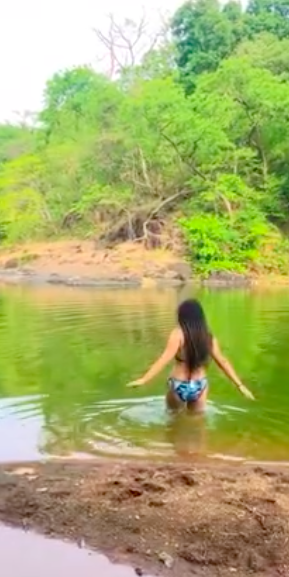 Why Harry Potter Is Losing Its Magic Charm

Harry Potter is one of the most successful entertainment...

Blond highlights are equally as versatile as the blond...

Selena Gomez has been out and about in a...